When we arrived at Disney we had a plan and we stuck to it and Day 01 landed us at Hollywood Studio. Disney’s park based on movies and television. The park isn’t overly large and confusing. You could honestly approach this park and cover everything in one day, especially if you plan it correctly. We lucked out when we arrived at the park early. We didn’t know they had extended hours, allowing people to roam the park one (1) hour before it legitimately opens. In this time there’s not a lot that you can do, but this sparks the absolute BEST MOMENT to get pictures in. You have the characters out with their shortest lines right in the front; photographers at the front gate to get that picture in front of the Chinese Theater; and more. There are sections of the park still closed like Animation Courtyard where you’ll meet Mickey, Minnie, Baymax & Hiro, The Incredibles and more! Once those doors open though the lines quickly meet their max waits since most the attractions here are shows, rather than rides. You can set all your Fast Passes up in a row and get the popular rides out of the way and leave the rest of the day for shows, but I would suggest making the Animation Courtyard your first stop only because more popular than the Rock n Roller Coaster is the Animation Class at park opening. This class fills up the fastest, but the opportunity to be taught by a real cartoonist + you get to keep you drawing and/or win the cartoonists SIGNED picture. He/she could be the lead on the next HUGE Disney movie. While you’re here you can quick jump in lines for Mickey & Minnie; Or if you choose to wait in the secret Baymax meet and greet in Hiro’s garage (the ONLY attraction Hollywood Studio doesn’t advertise). Once you’ve hit Animation, you can then start using those Fast Passes so you can free more up for later. – The Twilight Zone Tower Of Terror

What happens when you get hungry? You can head over to Sunset Boulevard and grab a quick bite or pull a reservation at any of their sit down restaurants. Hollywood Studio’s did a great job in building their dining themes around tv and film. You’ve got The Brown Derby straight out of Los Angeles; Sci-Fi Dine-In Theater for a flash back to the 50 and eat at a drive in movie theater; Or stroll over to Mama Melrose’s Ristorante Italiano for some wholesome Italian. If you’ve got young children whom are fans of Disney Junior, you can reserve breakfast for your family at the Disney Junior lot and eat breakfast with their favorite Disney Jr characters! It’s a great day for everyone because Disney truly created an experience for all ages. Whether you’re a toddler or mom and grandmom want to take a step back and relive the ORIGINAL Wizard of Oz- Hollywood Studio has it! I know you and your family will love it. But make sure you come into it prepared! Below I’ll share some of my tips.

Tips:
– If you can attend the park during extended hours, I would recommend you showing up early so you can get your pictures with Goofy, Donald, Daisy and Chip n Dale while the lines are the smallest.

– Use a Fast pass on Toy Story Midway Mania ; DO NOT use one for Fantasmic! until after you’ve used up your first three (3).

– Want to buy things early, but don’t want to carry it around? ALL STORES offer free carrier back to your Disney Resort 😉 Why worry about carrying it through the heat when you get have it wait back at the hotel in the AC.

– If you’ve got older kids, the Magic Of Animation class in the Animation Courtyard is a MUST for your first stop when the park opens. It’s a nightmare trying to get in the class because it fills up fast.

– Want a personal experience with Minnie or Mickey? As soon as the rope drops in the Animation Courtyard you’ll find Minnie and Mickey hanging out inside before people start waiting in lines. It’s less like a meet and greet and more of a ‘playing with the characters’ session. 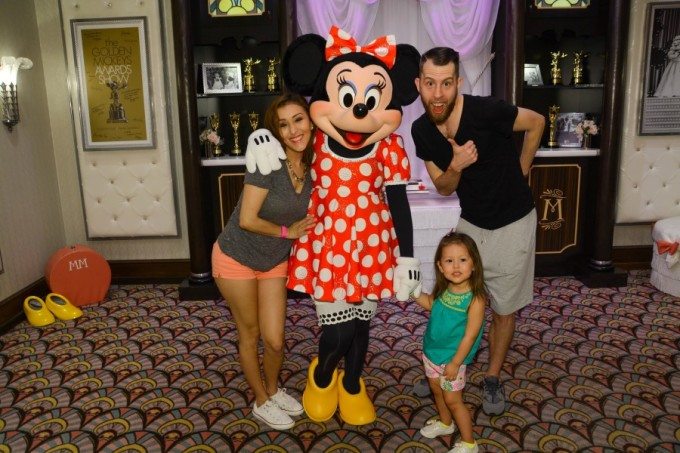 I stand alone since we had a scaredy cat with us– … and of course showing love to San Francisco. GO NINERS!