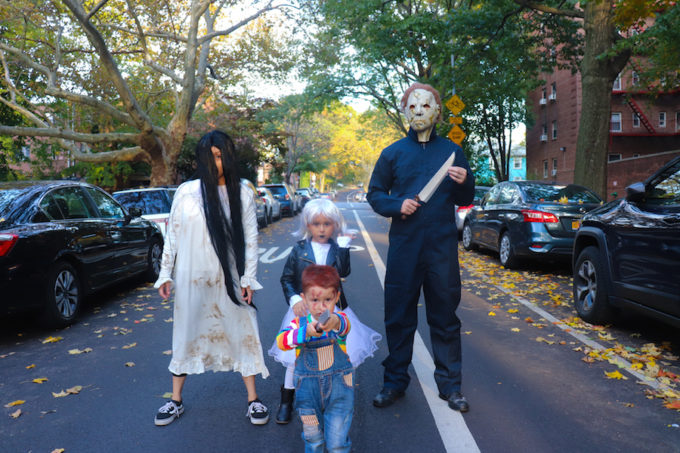 The day has come and gone! Another family Halloween theme under our belt. I was super excited for this year’s theme, which I picked out. I know, I know, how mean of a mother could I be to not allow my children to pick what they want to dress up as. I’ll get to that in a minute…

Last year, we were the Justice League and before the day even came, I had already chosen the horror theme. I LOVE, am obsessed with horror flicks– slasher films– the grittier and bloodier, the better. I wanted to be Tiffany from Bride of Chucky and have Gunner be Chucky, but then Ziane Eliz overheard our conversation and wanted to be The Bride of Chucky. So, there I was left to think of who I’d be. Boytoy didn’t know who he was going to be either. We got our costumes this past weekend and I wanted something CHEAP and easy, nothing where I had to paint and do my face. What else then The Grudge or The Ring.

Where we bought our Halloween costumes

In order to be the Grudge, I would have had to paint my arms and face white, no thank you! The Ring was simple– White Nightgown which was $25 and then a black wig which cost about $20. I took the gorgeous white gown outside and threw it on dirt and stepped all over it.

Boytoy wasn’t sure which horror flick he was going to emulate, but eventually decided to go with Michael Meyers. The face mask cost $40 (not happy about that) and then his blue uniform was purchased on Amazon.

I didn’t like any of the Chucky costumes I seen in store or online so I searched rainbow shirt and overalls all under $30. OH, and let’s not forget the orange spray can of hair.

Bride of Chucky is simple and they didn’t sell any at stores for KIDS. White gown for under $25 and an affordable leather jacket she can outgrow, for $19.

While we out walking around Target I looked at all the costumes and kids picking out their outfits and felt sad. Growing up my favorite thing was being able to pick out who I wanted to be. Let my imagination FREE. I looked over to Ziana and told her next year she could pick out her own outfit.Controlling mom who? NOT ME… ahem. Stay tune for next year… yay…!

Now, if you want to watch all the video fun make sure to check out the vlog at 10AM EST my Youtube channel! What Not To Wear (Sneakers, Sweats, Leggings)
My Night With Eminem
Lighting Up Your Home
Nov 1, 2018
0
Basil Pesto & Roasted Corn Rice Top Christmas Picks for Kids 2018