I thought it was a a non-spoken rule around the world that incest is wrong. I guess not, because people are always doing it. Yes, I know people have been doing it for decades, but some studies had proved that the child could come out with issues, but now that has come to be untrue. Whatever the case may be it’s gross! It doesn’t matter if it’s your second cousin or an adopted brother! You grew up with this person for years calling each other “dad,” “brother,” “grandpa” and whatever else you may have called them so how is it not wrong to you?

The most infamous “incestuous” couple that had the media buzzing was Woody Allen’s love affair with his step-daughter. I put quotes around it because people like to argue that it isn’t incest. Woody has argued for years that the “step-daughter” was never his daughter, adopted or step-daughter, it was just Mia Farrow’s daughter and he never raised her. Okay, so your douchebag who cheated on Mia Farrow with her daughter? Never raised her yet spent time with her? What’s this WOODY? 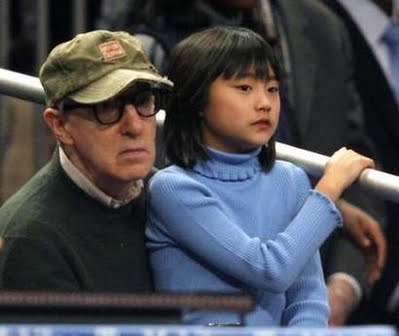 I wonder what his feelings for her were back then, hmmm.

How about Morgan Freeman’s love affair with his step-granddaughter, E’Dena? This is wrong on all spectrum’s of morality. First, Morgan and his estranged wife raised this girl since she was a child, he cheated on both his wife and mistress (lol) AND begun his love-affair with E’Dena. FYI this affair started when she was a teenager (CHILD MOLESTER). Yes, they aren’t blood, but you raised this little girl and would introduce her to everyone as your GRANDDAUGHTER! You had the grandfather-granddaughter relationship please try to explain how this is right buddy.

Another incest-type of love affair is that of Bobbi Kristina and her adopted brother, Nick Gordan. They grew up as brother and sister for about 10 years when Bobbi was 12 years old. Now their engaged and in love making goggly eyes at each other. Whitney’s mother, Cissy is outraged and agrees with just about half of America. This has me thinking though why after her mother’s death does she come out publicly about it? Why not when Whitney Houston was alive? MAYBE BECAUSE SHE WOULD BEAT YOUR ASS? Or maybe this happened after her mothers death. I understand this girl is going through a lot and can probably only trust him, but this doesn’t mean you lose your damn head and lay in bed with your brother.

These kind of relationships happen all the time and you probably may know a few people who have snuggled up with a relative you just don’t know it! A few months back, I was speaking to this Dominican woman who was telling me someone she knew was happy when her daughter had got together with her own cousin! Yes, you read it right. This woman’s outlook on it was that it’s her daughter’s cousin he wouldn’t hurt her like some stranger she doesn’t know. WHAT!? I get what she means, but that’s straight up blood relative and disgusting.

I read an article that people want to compare incest with homosexuality. Remember when homosexuality back then was “icky,” but people still did it behind closed doors. Maybe eventually incest will be what homosexuality is now? Publicly okay? The article That raised such questions was: http://www.albertmohler.com/2010/12/15/so-why-is-incest-wrong/

What do you think!??

Having A Past With A Friend
Lamar Odom-- Douchebag of 2013
Take A Cheater Back?
Sep 21, 2012
0
Confessions of a Mom Halloween Costume Shopping