Have you guys heard of the “Ban Bossy” campaign? OH MY GOSH! I was so infuriated, yes infuriated that this woman Sheryl Sandberg and celebrities like Beyonce, Jennifer Garner and Jane Lynch were supporting such a ridiculous campaign. This whole wacky campaign is about banning the hurtful and unfair use of the word “bossy” when describing a girl or woman. Seriously? I’m a female and don’t agree with this stupidity.

Apparently, girls are twice as likely as boys to worry that leadership roles will make them seem “bossy” so they won’t try to take the leadership role in anything.
I’m bossy and it doesn’t bother me when people call me such. I know what I want, how I want things done and how I want everything else in my life to be, so yes I’m bossy! You think things would get done if a girl didn’t speak up? Sure she can speak up, but if she doesn’t demand it nothing is going to get done the way she wants it. Do you think people like Beyonce, Jane Lynch or Jennifer Garner got to where they are by not being “bossy?” Heck no! They took their singing/acting careers by the balls and demanded they get this role or that role, this car or that car, this salary or no gig at all. They didn’t just say “Okay, I’ll take $15,000 to play at Madison Square Garden.” They demanded they get paid a certain amount by being a boss aka bossy (same thing)!

Young girls can simply see this ridiculous campaign and it’s going to backlash (if it hasn’t already) and girls aren’t going to want to stand up for themselves. They’re going to say, ‘well I don’t want to be bossy because Beyonce said it’s a bad word so I’m going to sit back and let others walk all over me.’ Why not campaign for words that actually are hurtful such as “b*tch,” “sl*t,” “wh*re?” Girls call each other that all the time and that’s a negative word that we women say to one another that should be eliminated, not bossy.

I’m raising my daughter to be a BOSSY. Beyonce states in the campaign, “I’m not BOSSY, I’m the boss,” um it’s the same thing just a cutesy way of saying it when you add the “y.” Not to mention that this is coming from the top-selling artist who acts like a stripper in her recent videos and performances– so to be a boss we need to act like that? I love ya Beyonce, but this was a campaign you shouldn’t even have taken on because you sound– and now look foolish. Was it worth the money?

Here goes millions of money down the drain because it all started with someone’s feelings being hurt. How about you put that money and your BS campaign up your butt, sit on it and never speak again Sheryl Sandberg. We as women want to rise against all the bad and negative so stop making us victims to something we have nothing to feel victimized about!

I’m all for building the self-esteem of young girls, which I already do on my twitter account so I’m not against this campaign because I don’t want to help the youth, I’m against it because these girls need to learn to take any negative remark (whether it is or not) and stand above it. Take it with a grain of salt and be better. Take the word, the bully, the harassment and fight against it by using their attitude, strength and confidence to let it weigh them down. Not cry about being called “bossy,” turn it around and use it for a positive. DUH!

This whole blog post is ridiculous because I’m talking about how unnecessary this campaign is because some little girl years ago, Sherly Sandberg was called bossy and it hurt her feelings. Grow up and become an empowered woman from that word (oh, wait I think you did). Being called bossy didn’t change your life dramatically lady! You took the word and ran with it and became the woman you are today by wanting to help the self-esteem of young girls and banning a word that’s not even hurtful is making you look foolish. Maybe I’ll take into consideration your next campaign when you actually use a word that’s hurtful? But then again I’m a strong woman who doesn’t let “negative” words bring me down so maybe I’ll pass on that too! 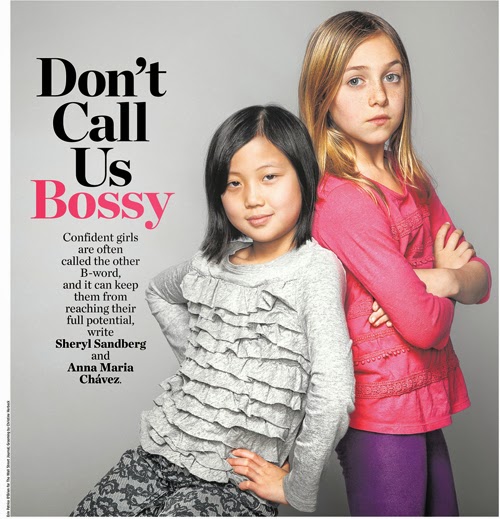