Breast Milk Not Only For Babies?

Who likes a nice tall glass of water?

Or a tall glass of milk? I remember back during the Jerry Springer days — where kids would cut school to watch the raunchy show, there was an episode once where this woman stripper would let her clients drink her breast milk! Don’t ask me how this came to mind, but it did.

So I decided to take it to Internet — because the Internet can’t put anything up that isn’t true (side-eye)– and I found a ton of articles where people were OBSESSED with breast-milk.

Strange? Gross? Well if it wasn’t it wouldn’t have been on the TLC show “Strange Sex.” The husband, Jeff, states that his wife’s breast-milk has become crucial to his sex life and has helped cure his erectile dysfunction. His wife doesn’t mind either and actually partakes in this gross sexual act. 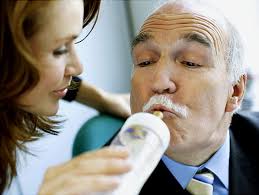 Have we all tried breast-milk? Some, especially those curious couples who wonder what their child is actually drinking. What does it taste like? We wonder. I tried a drop and was so disgusted I didn’t even try it, if that makes sense, haha.

Anyone remember this episode of Friends? China has made news that will shock you. Women are selling their breast milk! And the only way isn’t just pumping it and giving it out like Jell-O shots, adults are able to take it straight from the source! The occupation is called “wet nurses” and they can bring in an income of $2,000-4,000.
You can read a bit more on it here.

However, this is probably an outrage to us since we don’t hear about it. But there’s a Mothers Milk Bank in San Jose who offer somewhat of the same services China does, just not as graphic (from the source).

One man Howard Cohen who was diagnosed with prostate cancer found an Swedish study online that stated breast-milk helps with cancer, bolster immune systems, and improve digestion. Cohen is adamant that adding breast-milk into his daily smoothies have helped put his cancer into remission.

Another woman claims to give her 15-year-old son 8oz a day of breast milk which has helped put his Cohen’s disease under control.

Babies drink breast milk for beneficially reasons; help their immune system, fight infection, increase intelligence, and combats obesity. If it can potentially help diseases in adults then why not? I’m not opposed to that.

What I am opposed to is adults drinking breast milk for arousal. Some women have trouble producing milk and a man– or women, who takes in the breast-milk just because is like taking- well milk from a baby! Ha, literally.

Femme Fatale: Jodi Arias Part 11
Dancing Like The Stars- In the Comfort of My Own Home
Stay-At-Home Parent Description
Jul 18, 2013
2
Smoothie Diet Day In The Life Of Mommy & Z